I’ve made various references recently to this book,

and meant to write something more directly about it. The main problem is that there is so much interesting stuff in it, that it’s hard to know where to start, let alone end. I might add, also, that I have some fairly serious reservations about it too; one of the positions criticised in it is what he calls ‘the rationalist delusion’. That’s me, folks, but here I don’t mean to go into why it’s not a delusion, and why I’m right, and Jonathan Haidt is wrong.

Much better anyone interested should go and buy a copy of the book, not least because it is well written, and cleverly too. Haidt started off as – and I think still is – a proper scientist, a psychologist who studies morality, but with controlled experiments, and reference to what scans can say about what is happening in our brains when we experience moral feelings. As such, he understands very well how to persuade, and says in the book that he is going to use what he has learned in the book. The main points of each chapter are also set out clearly, and summarised at the end; he really does know how to teach, as well as do research.

The first main message is that the rational and instinctual parts of our brains are distinct, with the instinctual being far more important. He uses a metaphor of the elephant and its rider, with the elephant, very large, but also with a lot of knowledge and memory, so far from dumb, being the instinctual, while the rider is the relatively puny rational mind, which will sometimes guide the elephant, but most of the time just goes with it. In this schema, our morality is elephantine, and the ‘rationalist delusion’ is to think that we can get to what’s right and wrong by abstract reasoning. And this he knows from seeing how key parts of the brain light up when presented with moral issues.

Another message is the variety of moral impulses, and how they differ between what he, as an American, calls liberals and conservatives. Liberals focus on a reduced number of moral impulses – compassion and fairness – while conservatives have better developed feelings about loyalty, sanctity and authority, while also being able to understand compassion and fairness. So liberals systematically fail to understand what makes conservatives tick, but not vice versa.

This is the starting point for an element of personal history in the book. Haidt describes himself as originally a rather dogmatic liberal, but with the insights his research had given him, became frustrated at the needless mistakes John Kerry was making when running against George Bush. In the course of the book he also describes spending some time in India, being initially appalled by aspects of the Hindu tradition, but after a while finding himself able to feel they were as legitimate as his own cultural position. Having finally landing a position at the University of Virginia, he also found himself coming to admire the rituals associated with college football games – alumni coming in from all over the States, happily getting drunk on generous supplies of beer, and roaring their team on. The narrative of becoming more conservative, but also more understanding, as someone gets older is hardly new, but I’ve never read it told along with the associated neuro-science.

There’s also a persuasive attack on what I think, following reading this book, is one of the weak points of what he would consider the dogma of the ‘New Atheism“. This is the doctrine, which may seem abstruse, that there cannot be ‘group selection’ in human evolution. In doing so, he is positioning himself against one of the arguments of Dawkin’s “The Selfish Gene”, which is that the only sort of altruism which could have emerged is kin selection, one summarised by the aphorism that it’s only worth laying down your life to save two brothers or eight cousins. Instead, Haidt argues that, while still being “90% chimpanzee”, we are also “groupish”, so perhaps 10% bee. To make the case, he has to argue also that human evolution did not stop suddenly when all the things which seem to make us human developed, and allowed us to co-operate in large social groups – e.g. the language, use of fire to cook, and he would argue, the emergence of morality hard wired into our genes. My mention of cooking here does not come from Haidt’s book, but this I read a while back “Catching Fire: How Cooking Made Us Human“, where the impact of the cultural practice of cooking on how our guts and jaws have evolved seems unavoidable. So I find I can accept that what Haidt has studied, which any reasonable person would call morality, is a natural phenomenon, rather than having a purely rational basis.

That’s about as much as I want to say at this point. The subtitle for the book is also revealing “Why good people are divided by politics and religion”. Haidt is appalled by the partisan politics which have developed in the US, and wants more than anything else to help people overcome this behaviour. It’s why I think of all the people on the Forum, it will appeal most to Lee, which is why I’ve ordered a copy for him, and am about to pick it up from Kirkdale Bookshop. Sorry my generosity will extend no further, but I seriously recommend this as a good read to everyone else.

This is an argument for a scalable initiative to support volunteers who want to make their neighbourhoods look better. In summary, there should be some high quality, consistent but adaptable branding, to identify volunteer initiatives, and support communications with and about them. The initiative would be owned by a professional managed organisation, ideally operating at a national level.  More details below in Recommendations END_OF_DOCUMENT_TOKEN_TO_BE_REPLACED

Something of a personal announcement here. END_OF_DOCUMENT_TOKEN_TO_BE_REPLACED

Reposted from my local Forum, 16 Jan, 2014, with a more helpful title, and some editing.  It rambles a bit, but putting here now because it touches on various questions which arose yesterday (July 25, 2018) when I attended a consultation event on ‘De-risking’ growth in the Cambridge Milton Keynes Oxford arc.

I’m thinking about it now as much as raising the general problem of why landowners and other interested parties fail to co-operate.

The trigger here is this BBC interview with a member of the Chartered Institution of Water and Environmental Management (CIWEM) as reported here:

END_OF_DOCUMENT_TOKEN_TO_BE_REPLACED

Rather than purchase land for some monetary amount, compulsorily or otherwise, and load local authorities / development corporations with debt, a South Anywhere County Development Corporation (SACDC) would issue equity to landowners whose land was affected by the JSP, in exchange for rights SACDC acquired over the land.  END_OF_DOCUMENT_TOKEN_TO_BE_REPLACED

As of 29th December 2017, the Labour was still campaigning against charges which unfairly target the more affluent

We can agree that the “strong and stable” is a myth, but the flip which showed it happened because Labour offered to insure the inheritances of those whose parents have benefited from the financialisaton of property. END_OF_DOCUMENT_TOKEN_TO_BE_REPLACED

I thought I’d get the message in the subject line, to help anyone who has problems scrolling down on whatever device they are reading this on. END_OF_DOCUMENT_TOKEN_TO_BE_REPLACED

Three days to go, with all the debate going on, I wonder what contribution I can make other than voting – to Remain – on Thursday.  I have helped with a few local leafleting sessions, and twice some some StrongerIn phone banking.  This evening and Wednesday I hope to be doing some door knocking locally, and tomorrow I’ll be joining the Remain battlebus.

On social media, I’ve been relatively restrained, mainly because I think it’s more productive to follow the guidance of experienced campaigners – so what I describe above.  Incidentally, recognising the value of experts is of course one of the strongest indicators of Remain voting intentions.  I’ve also been refrained on our local social media because I think calmly stated opinions are more effective, while I prefer to keep Facebook more for family and friends, and Twitter, and this site, for more developed arguments – e.g. about housing.  But I really do think this referendum matters, so I’m making an exception, and explaining here why I think we should remain, and also posting in on my Facebook and local Forums.

In a single carefully worded sentence, I’m for Remain because I believe in the value of trade, and other forms of international co-operation, and withdrawing from existing structure whereby this is arranged is not going to improve matters, least of all for a country which takes itself out these arrangements.

How can that not convince anyone to vote Remain also?

From experience of reading and hearing Brexit arguments, there are all sorts of reasons, such as not their appreciating the value of international trade, or thinking that the EU is a uniquely unreformable organisation for making the appropriate arrangements.  The obviously resonant Brexit argument is the wish to control immigration, which is not completely unreasonable, but being able to live and work in the countries where there are the best opportunities for them is part of international co-operation.  European countries outside the EU, such as Norway and Switzerland, have very high levels of immigration, because that is what successful economies need.  To relate this to the personal, the UK economy is fairly successful, with lower unemployment than most of the rest of the EU, and so the company which provides carers for my father is very largely staffed by Poles.  Post Brexit, we would still need Monikas.  Our challenge is to make the most useful contribution to resolving the global problem of migration, caused by the current problems in countries such as Syria, Afghanistan and Somalia.  I have no doubt that is best done as part of the EU.

As I was cycling up Lordship Lane today, a cabbie cheerfully called out of his window to me

Would it have been the same if I’d been wearing lycra, rather than dressed for bagging and shifting thirty odd rubble sacks of rotted horse manure? 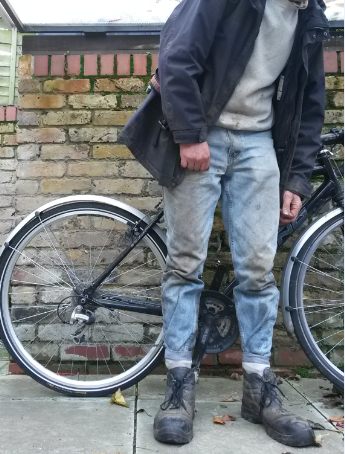 I only met Uncle Jack a few times, towards the end of his life, in his family home in Dagenham, but he’d featured in our oral history – how in 1914, to the dismay of his Kier Hardy admiring mother*, he’d joined up along with his brother.  He only just survived the war, having been left for dead, at Loos I think, and when I met him, the form of his head wound was plain under his thinning hair.  Jack’s family socialism also survived, but it would seem with different emphases from his mother’s. END_OF_DOCUMENT_TOKEN_TO_BE_REPLACED