This is an argument for a scalable initiative to support volunteers who want to make their neighbourhoods look better. In summary, there should be some high quality, consistent but adaptable branding, to identify volunteer initiatives, and support communications with and about them. The initiative would be owned by a professional managed organisation, ideally operating at a national level.  More details below in Recommendations

On a short walk into Forest Hill, SE23 this morning, I passed several spots where volunteers are trying, or have tried, to do something to make their neighbourhoods look better. One thought in setting off was to prospect a location where the chair of the Forest Hill Society Environment committee has suggested I do some planting myself, 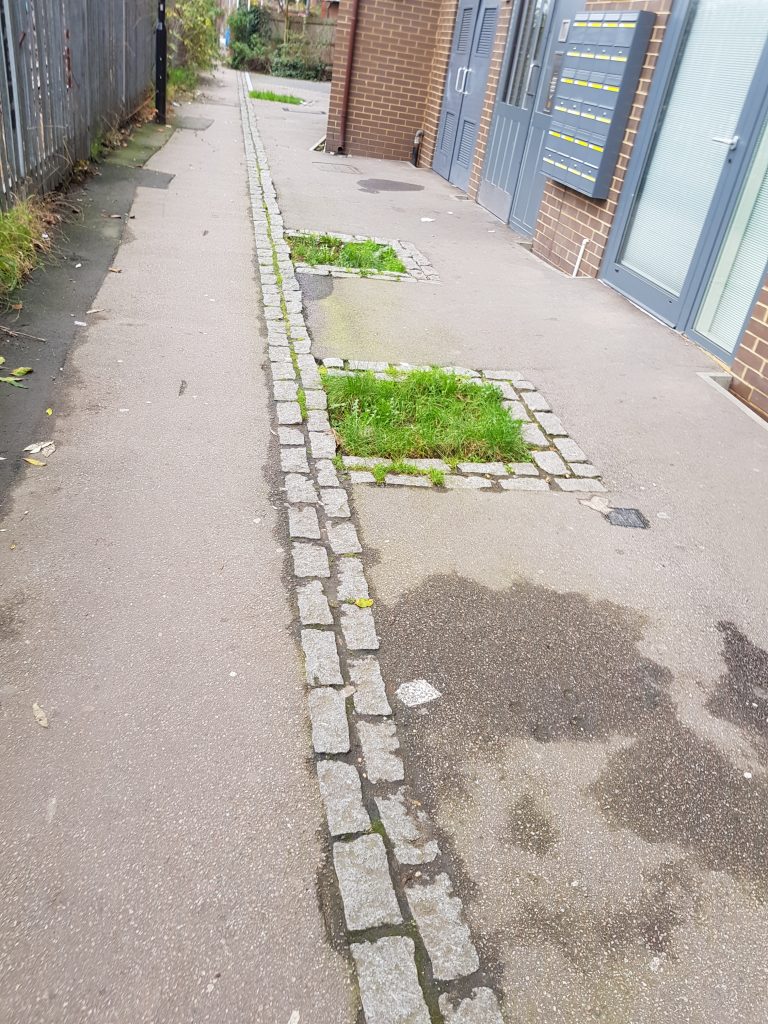 and I was wondering, if I did, whether there should be some signage to say what was going on, maybe attached to the railings on the left, or the brickwork on the right, if Network Rail was going to be difficult.  Most of the places I passed had no signage, but others did, although the standard was a bit variable.  So here are some thoughts about how what that signage should be, and how it should work, with illustrations from my morning walk.

The overriding purpose of any signage should be to support the initiative to make the neighbourhood look better, so straightaway we can say it would need to look good, and last.  Signage such as this, printed on paper, then laminated and pinned is OK as long as it is removed or replaced when it starts to get wet, or is vandalised, but that cannot be depended upon. 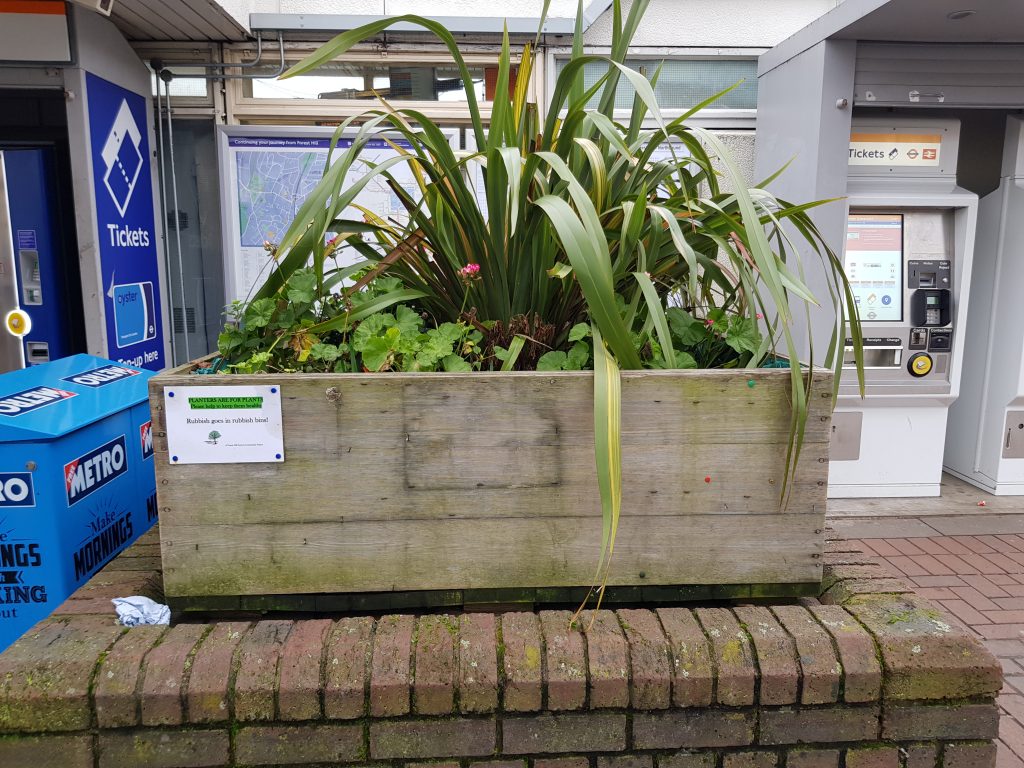 Even so, it conveys a message 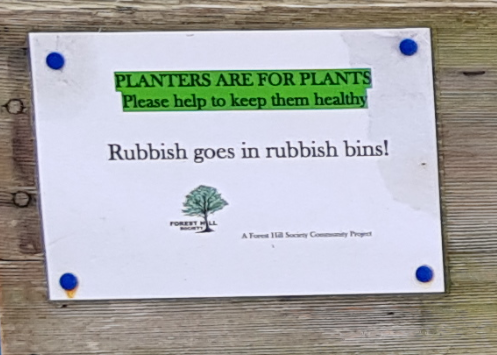 although I’d say the most important one is the implicit one, identifying the initiative with the community group responsible for it.  That works both by giving kudos to the Forest Hill Society, and helping anyone who wants to get in touch with them, either just to say ‘thank you’, to help with this initiative, or to get involved with other things done by the society.  However, I also passed another Forest Hill Society initiative 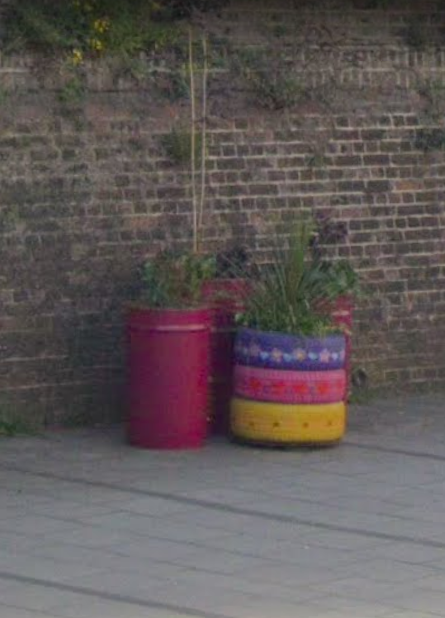 without any signage, which I’d say was an opportunity missed. It’s possible this was because there wasn’t the problem with people using these as litter bins, or more likely that it was harder to fix a notice anywhere.

Another community initiative did have some good looking signage 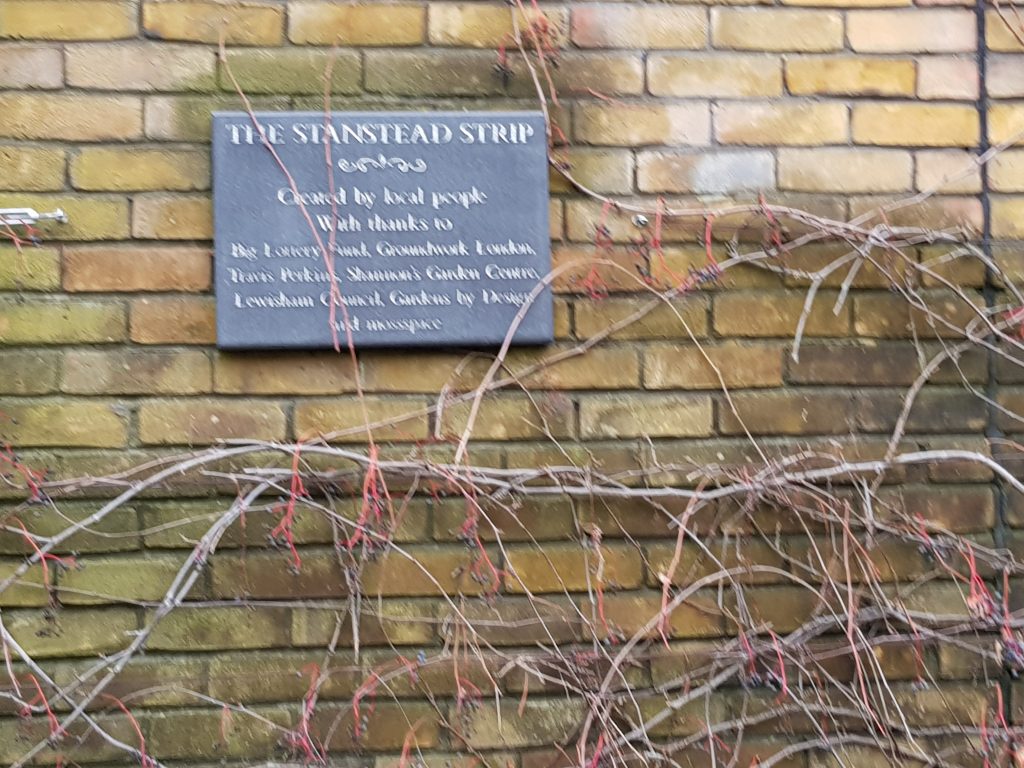 with some more, less stylish, but still unvandalised signage nearby 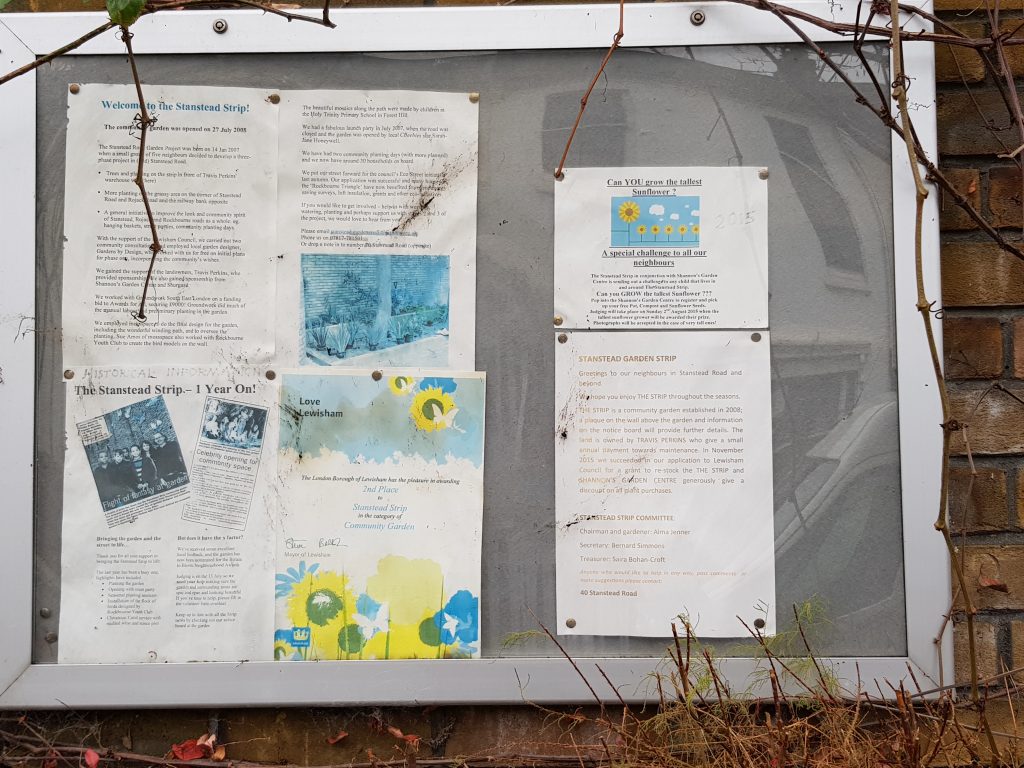 There’s lots of good information here, including recognition of local businesses who support the volunteers, but it is still years out of date, and 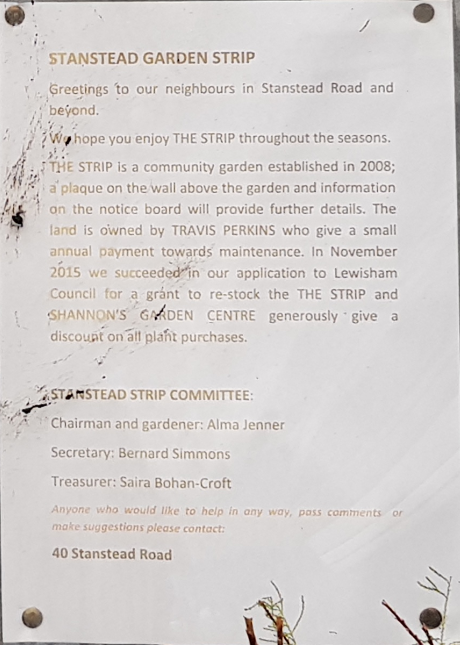 Here are a couple of other locations I passed, one where the volunteer has given up, because the bench she put here 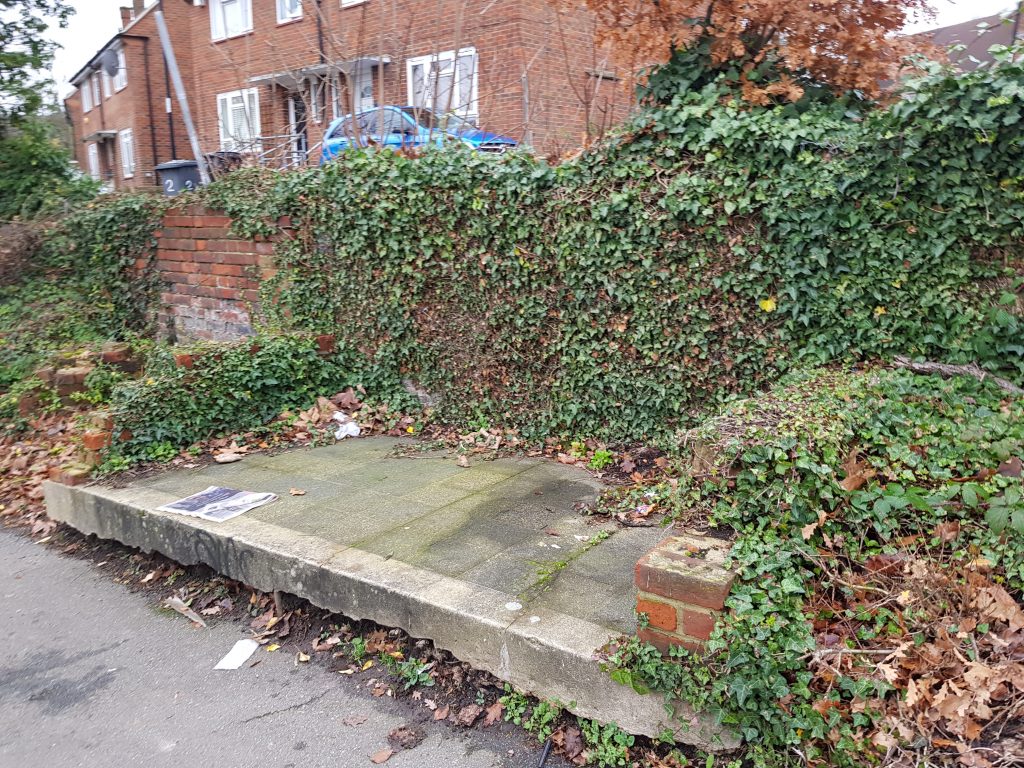 got vandalised or stolen. I’ve no idea who started off planting this other, a manky old rose bed, but having seen someone else just getting on with things, I too started planting in it. 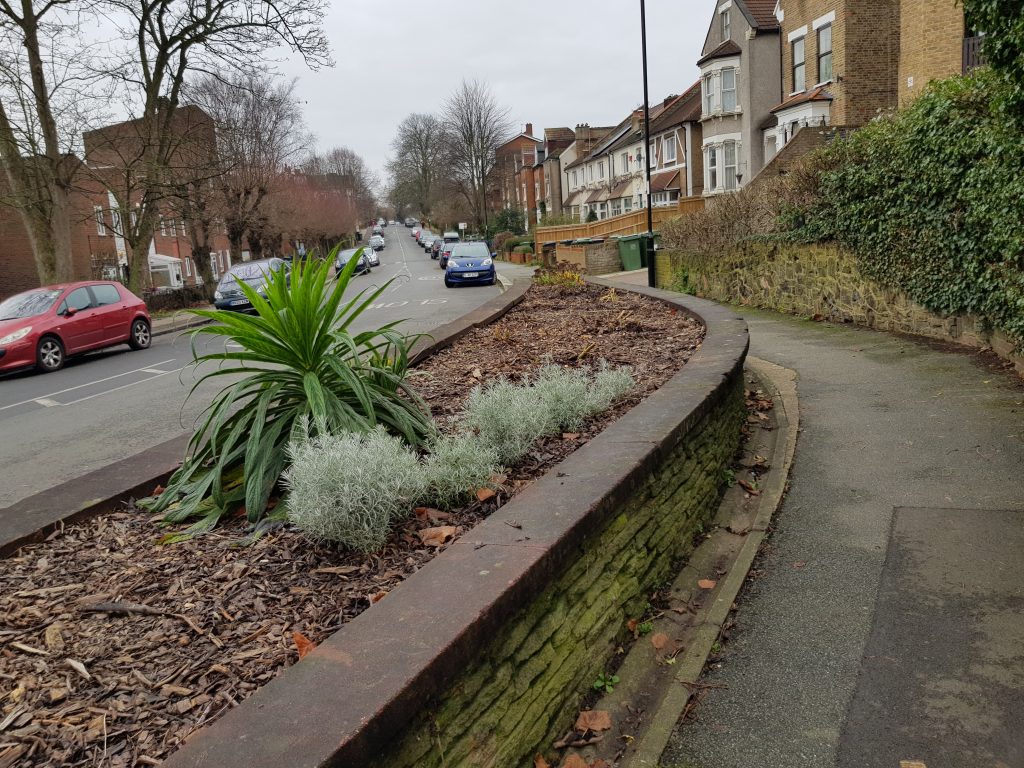 It gets a bit of littering, but not that much, and the plants don’t get vandalised, so I can say that this sort of thing can be a good positive experience.  There is no signage, however.

Finally there is this signage, for a bit of open access land*, which does get graffiti’d, although the signage is still there. 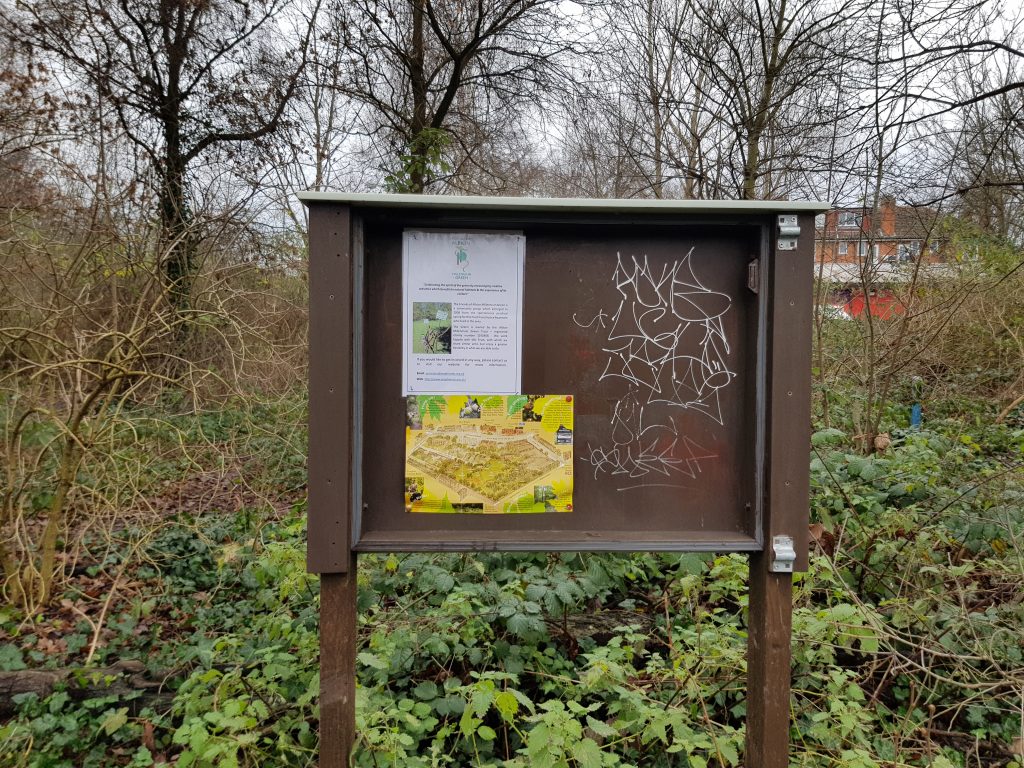 Special as I think SE23 is, and however much I support the Forest Hill Society and other local community groups, I know there will be similar groups and individual volunteers all over the country. Wherever they are, there will also be hard pressed local authority officers, and councillors, trying to do what they can for their neighbourhoods, and looking to support and encourage such volunteers, with what few resources they have.  In all cases, there will be some need for communications, so the key recommendation is for some robust signage which can be affixed at or near a volunteering site, with branding to say “this space is maintained by local volunteers”, and an id for the site. This could just be a number, although with GPS locations available on modern phones, even this might not be necessary.  By submitting a photograph of the site, or equivalently sharing its location, it would be possible to find out, or ask for information about the site and its current management, with as much or as little information volunteered as the volunteers want.  An active community group, such as the Forest Hill Society, would generally want their name to be known, and could have their own logo added to the signage.

The “professionally managed organisation, ideally operating at a national level” envisaged in the opening summary, as well as owning the brand, and arranging for the installation of signage, would also be the database owner, and need to maintain contact details, as much as possible, for the relevant volunteers. This will not always be up to date, or even known, and similarly, owners of land or their agents may not be known, but neither possibility should be a show stopper. In fact, it could be how a land owner discovers, discretely, who is doing something on their land, if the volunteer wishes to be identified at all, while for a volunteer, it could be a way of finding out how the owner is, and offering them a means of contact, if that is what the volunteer wanted.

It’s tempting to minimise how much this would cost, so rather than argue that it would certainly be possible to finance this, it’s safer to argue for funding to assess how much it would cost, who might pay for it, and who would do it.  The branding would be a one off cost, so is unlikely to be critical, especially if an existing organisation’s brand, as project owner, could be used.  The cost of producing and installing the robust signage suggested will be more critical, and a study would be needed of the range of possible materials in which it would be needed, and how installed, based on an initial survey of possible sites.  There would then be the task of identifying actual sites and telling people what the signage signified, and following on from that, the task of maintaining the database of sites, volunteer contacts, and owners / managers.  That would be a task for someone with experience of working with local authorities and community groups.

However much local authorities might like the idea, they are unlikely to have the budget to pay for them.  More likely, therefore, some combination of central government (MHCLG) funding, grant making body, for initial studies, and on going commercial sponsorship, in return for logos appearing alongside the brand owner’s, on the signage.

The first organisation which occurred to me as a possible owner was Groundwork UK, “working across the UK helping communities find practical solutions to the challenges they face.”, but doubtless there are others.

* For what it’s worth, I am the Treasurer of the tiny charity which owns this space, the Albion Millennium Green Trust